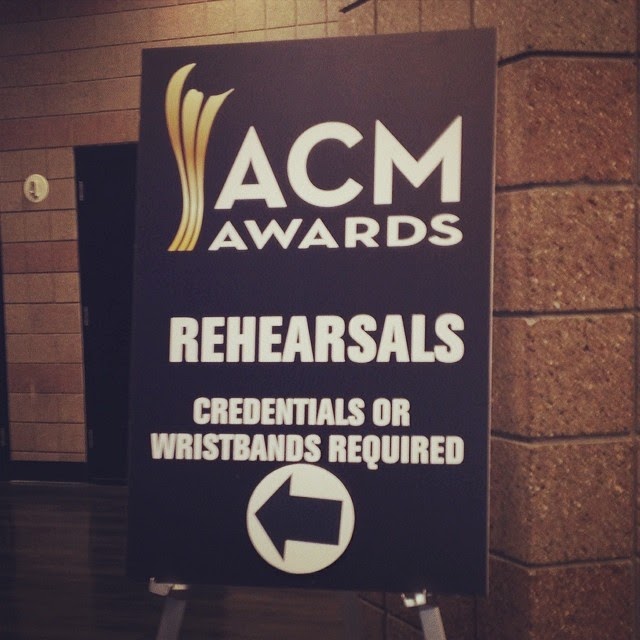 Ever wonder what goes on behind the scenes at the awards shows on TV? I know I did. I was fortunate to go to the dress rehearsals for the 49th Annual ACM Awards last week and it was both fascinating and boring at the same time. Here are a few things I learned behind the scenes.
1. They’re so damn repetitive. For Jason Aldean’s one song performance, the rehearsal took about 45 minutes. First they sound checked the percussion. Then they ran through the song. Then they sound checked the acoustic. Then they ran through the song. Then they brought Jason Aldean out (who is that guy in sneakers and a Braves cap) and sound checked his guitar with the other instruments. Then they ran through the song. Then we got to hear him sing it (yay). Then we got to hear him sing it again. Not that I’m complaining.
2. Blake Shelton is a hoot on and off screen. Just all the time.
And he likes to hit on his wife. Just all the time.
3. Television producers don’t care who you are. They will cut you off mid sentence if you screw up. Poor Miranda Lambert had to repeat herself five times for her taped intro.
4. When artists weren’t rehearsing the actual performance, there were anywhere from 10-30 people on stage at once doing a variety of random things.
5. Does anyone know how creepy it is to watch people climb onto those lights on the ceilings??? SO creepy. They swing. A lot.
6. Oh and did you know all the applauding is prompted? I had forgotten after last year but by the end of the weekend, I was sick of producers saying “APPLAUSE APPLAUSE”. And if you don’t do it right for the first take, they will make you do it again. And again. AND AGAIN.
7. Producers like to swear a lot off camera into the mics. It’s pretty funny.
8. Even Blake needs to be powdered and touched up.
9. But his voice is perfect every time.
10. Multi tasking saves time (and probably a lot of money). Part of the rehearsals was for the actual awards but we also got to watch the filming for Blake and Miranda’s portion of the ACM Presents special.