I’m so sorry this post is boring. I embarass fairly easily sometimes (doing/saying something stupid) and at times, really not easily at all (nudity related situations). I’m not sure if this is lucky or not, but I’ve been embarassed moderately so many times that none of them really stand out. I’ve been walked in on topless, fallen on my ass more times than I can count, and probably said a lot of things I really should not have said.

I guess if I had to choose one, it would be the time I walked in on my grandmother topless. Full on topless. Adjoining hotel rooms mean you should probably not be wandering around topless. Just saying. I am seriously not going to elaborate, it was somewhat traumatic.
On to Tucson Part 2!

My last day  was considerably drier. Karissa and I drove out the the Mission San Xavier Del Bac. Beautiful mission in the middle of the desert. We wandered, took lots of pictures of some adorable cacti, and grabbed some frybread. If you have never had frybread, you are severely missing out. It’s FRIED BREAD (the name was not imaginative at all). This particular one was filled with beans and cheese. DELICIOUS. We walked through a couple shops and got some really great native jewelry and the shop owners gave us some sage to burn as a “welcome to Tucson” present. So sweet!

Next, we saw a rattlesnake. Not up close thank God, but yes, a rattlesnake. We made the drive out to Saguaro National Park (stopping at the Old Tucson gift shop along the way). I have never seen so many Saguaro cacti in my life. They were literally everywhere. No wonder it’s called Saguaro National Park. There were a number of trails and along each trail was a very clear Beware of Rattlesnakes sign. Kinda creepy. We were just wandering down a trail by the visitor’s center when a woman overlooking the visitor’s center screamed “SNAKE”. Now I really don’t mind snakes. They’re kinda cool as long as they don’t sneak up on me. POISONOUS snakes, on the other hand (venomous whatever) are a completely different story. Since the woman was overlooking OUR TRAIL, we decided not to venture any further. We went inside the building and up on to the overlook where the park ranger kindly POINTED OUT the rattlesnake that was right along where we were headed. Kinda cool since we were about 15 feet above it now and watched it disappear into the shrubbery. Not wandering down there now.

We rounded off our exciting rattlesnake adventure with some ice cream at The Hub (I got blueberry pie and dirt) and tamales at the Tucson Tamale Company. Great southwestern lunch with great family before heading to the airport back home to Vegas! 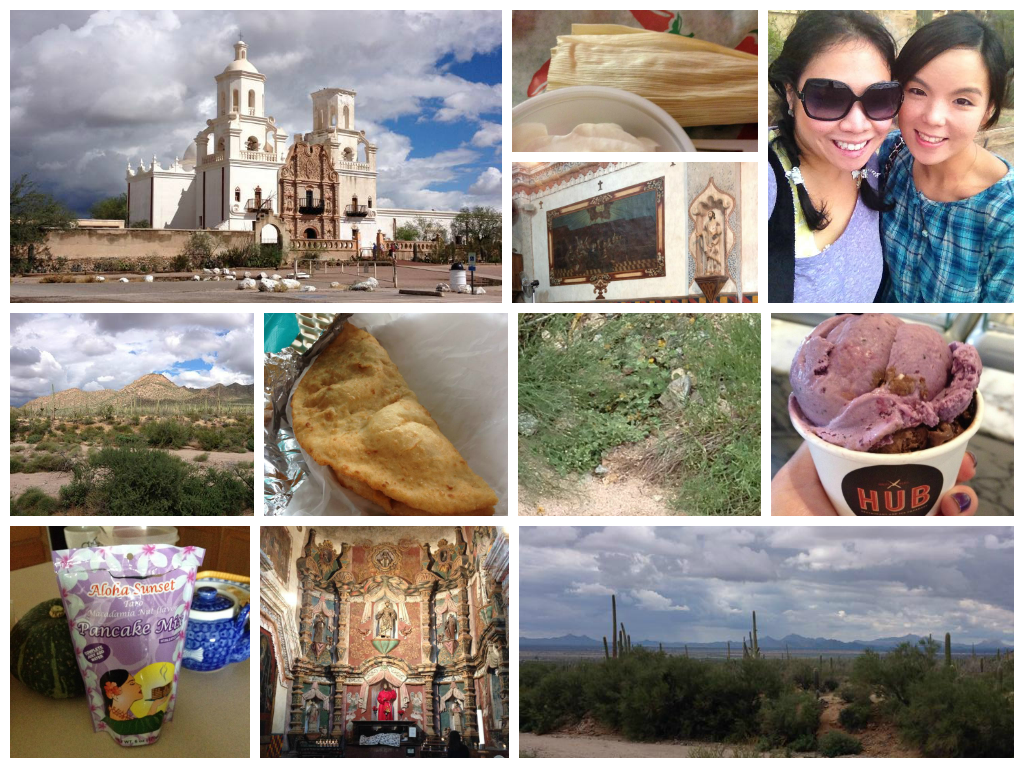