Okay, okay. Admittedly, Foodie FRIDAYS sounds way better but Fridays are busy and. Yeah. So…
Welcome to Foodie Tuesday!
I’ve recently started cooking (now that I have a friend’s kitchen I can borrow and a designated dishwasher… Sorry, Mike) and I decided to dedicate a day to my somewhat accomplished cooking outings. A few years ago, a bunch of my friends and I would go to a different ethnic restaurant once every couple weeks and we called it Ethnic Cuisine Nights. Well, I’m trying to save money for travel so… I started cooking instead!
Anyway… A few weeks ago, Mike and I decided it would be fun to do German food for Octoberfest. World Market had a huge display of German foods so I stocked up on some spaetzle, mushroom soup, schnitzel mix, and some random apple soda that seemed to fit the bill. With Mike’s limited kitchen supplies (we reused the same pot multiple times in about 30 minutes), we made the soup, and boiled the spaetzle.
Unfortunately in the midst of figuring out which strange pot to use for frying the schnitzel, the mushroom soup became mushroom sauce. So… instead of wienerschnitzel we ended up with jagerschnitzel. Tada!!!
Meanwhile, I threw some phyllo pastry into a cupcake pan along with some apple pie filling, raisins, and cinnamon. Oops, as an afterthought, I poured some melted butter on top. And then kind of set the nonexistent cooking timer in my head. If the strudel didn’t work out, it would be fine, I had already made German chocolate cupcakes.
While the spaetzle looked way too watery and we had to scoop it out of the pot with a slotted spoon, the schnitzel was really nicely cooked. The potato salad I bought went really well with everthing. The apple soda was really good.
Oddly enough, the strudel came out perfect. Like PERFECT. Like we were sad we didn’t make more. The whole random meal came out really really well and high fives were had all around. Well, around the two of us. 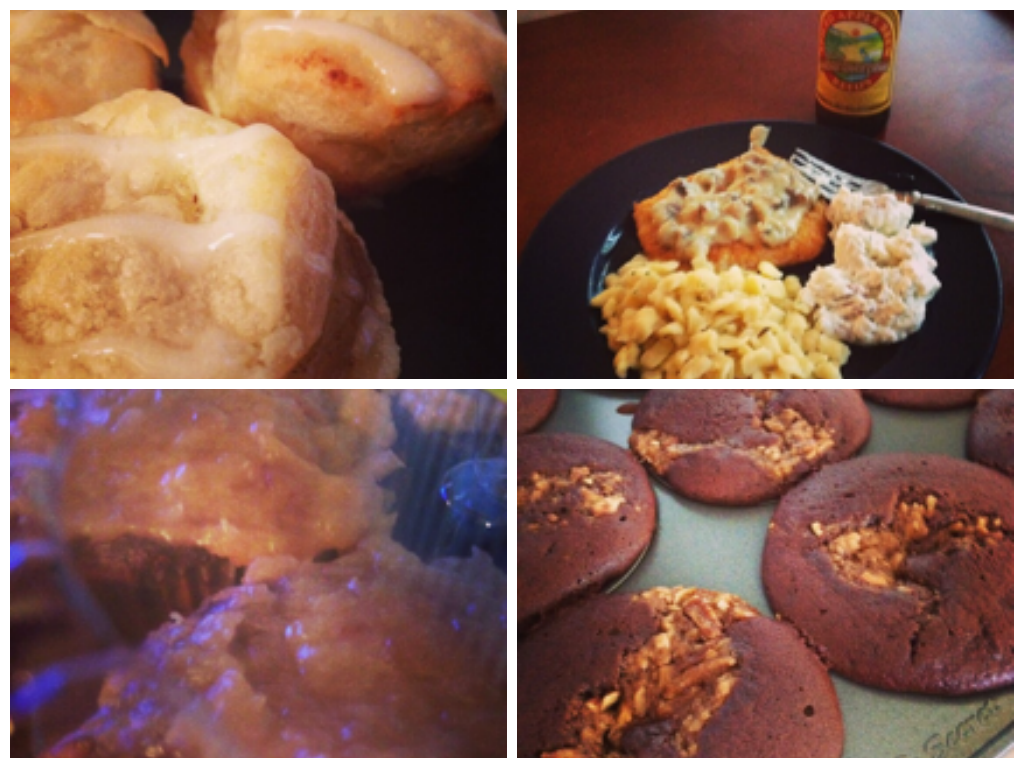