I love German food. I love the idea of Oktoberfest.
I don’t like being around a ton of drunks at Haufbrauhaus. So I decided to make our own German feast for Oktoberfest. I used a bunch of really awesome mixes I got from World Market (I effing love that place so much it’s not even funny) for mushroom soup, schnitzel, and a big bag of spaetzle. I also made a simple apple strudel that was a bit weird but still yummy. 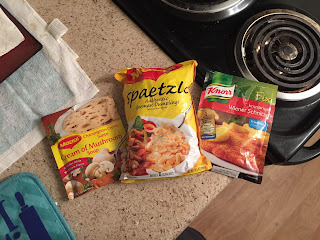 The first time I cooked the mushroom soup, I actually kind of screwed it up and left it heating waaaaay too long so it became mushroom sauce. It was actually the perfect sauce for our schnitzel so I purposely did it again. The mix for the schnitzel is super easy, doesn’t require endless dredging in egg and flour mixture, and can be made with so many different meats (we used chicken because it was easy and we had it on hand). I added salt and pepper to the spaetzle and it actually tasted really good with a drizzle of the mushroom “sauce” as well! The only thing we bought was the potato salad to go with the meal. Super fast and easy and looked way more complicated than it was! 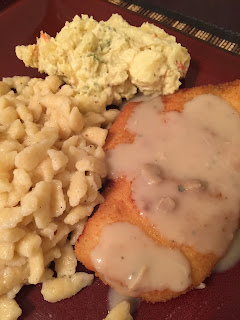