Happy Friday!
So last Sunday for Super Bowl, I made a fun little peach biscuit bake for dessert. I had an idea in my head that I wanted to try out and since my hometown team (Atlanta Falcons) was playing, I figured peaches were perfect for a fun dessert!
Peach Biscuit Bake
1 can – Peach Pie Filling
1 large roll – Refrigerated Biscuit Dough
1/2 cup – Peach Flavored Liquor (I used Old Camp Whiskey)
1/2 cup – Cinnamon Whiskey (I used Fireball)
Cinnamon
Sugar
6 tsp – Melted Butter
First I melted the butter and then added in a large dash of the peach liquor and a large dash of the cinnamon whiskey along with about 2 tsp sugar. I whisked this together in a bowl to make a paste and then I opened the tube of biscuit dough. Start rolling the biscuit dough into balls and then dip them into the paste making sure to evenly coat the balls before placing them loosely in a medium sized glass baking dish (make sure the dish is greased and don’t pack the balls in too much so they have space to grow in the oven).
After all the dough has been rolled into balls, take the remaining paste and add a little water and about 1/4 cup of the peach liquor and 1/4 cup of the cinnamon whiskey. Add some cinnamon and the gel part of the peach pie filling. Scatter the peaches around the pan between the dough balls. Whisk the peach gel with the paste until it forms a bit of a syrup and pour evenly over the dough balls. Bake for 30 minutes or until the tops of the dough are golden brown. 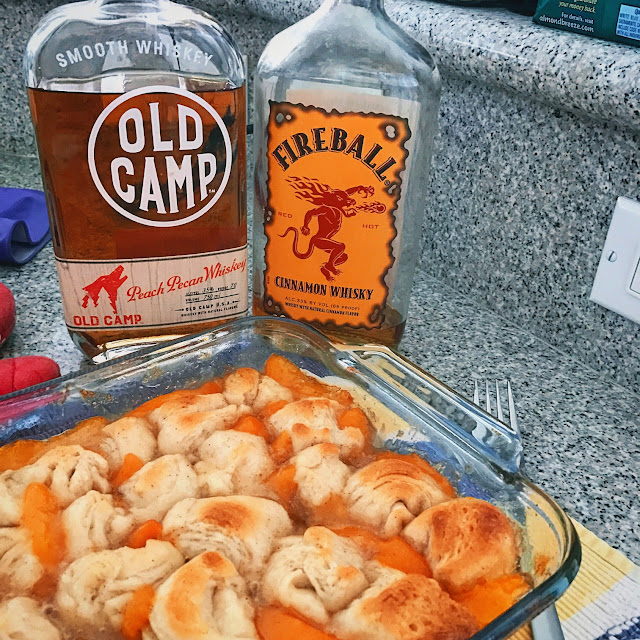